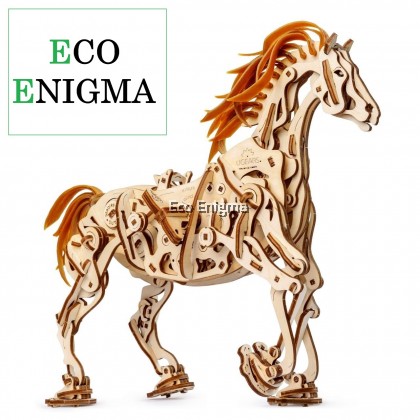 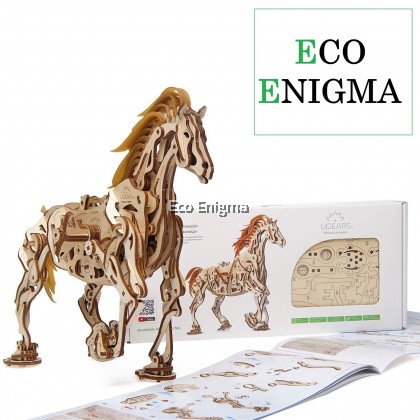 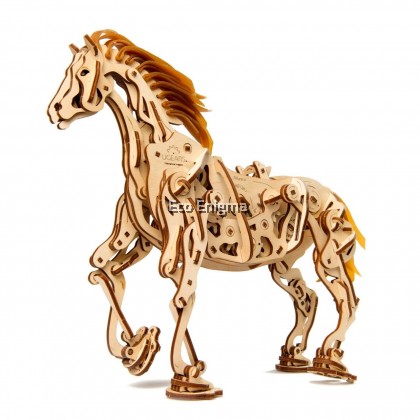 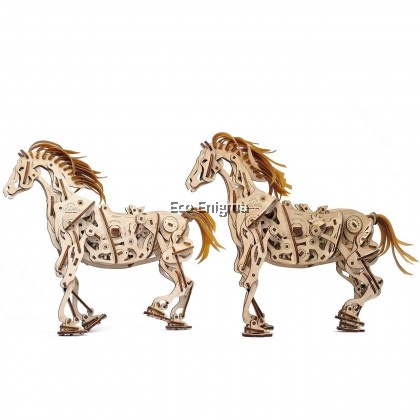 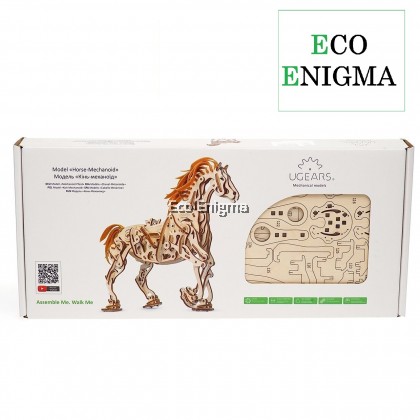 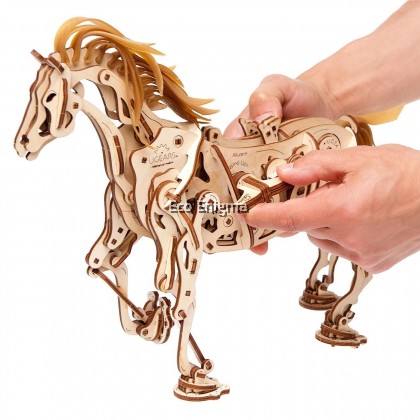 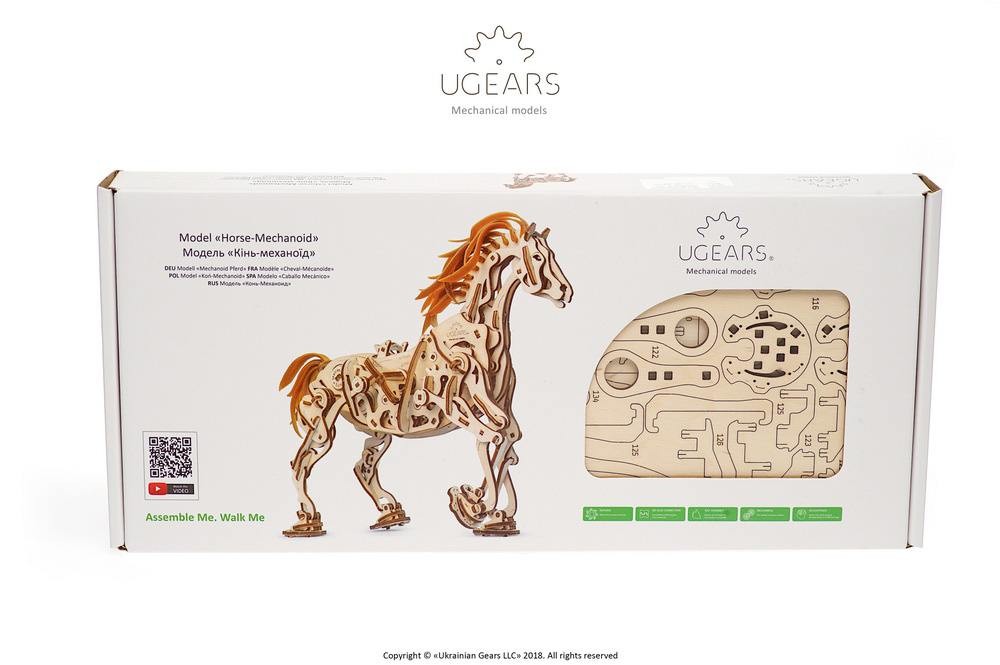 The Horse Mechanoid is Ugears first mechanical walking quadruped.  Long before the electricity and steam-powered engines made a significant impact on society’s progress, horses were used as the main transportation and hauling source.  From very early on, in Ancient Greece, Japan, and China, inventors inspired by the idea to enhance nature’s most impeccable design with endurance and durability of the mechanisms, attempted to build various walking machines. 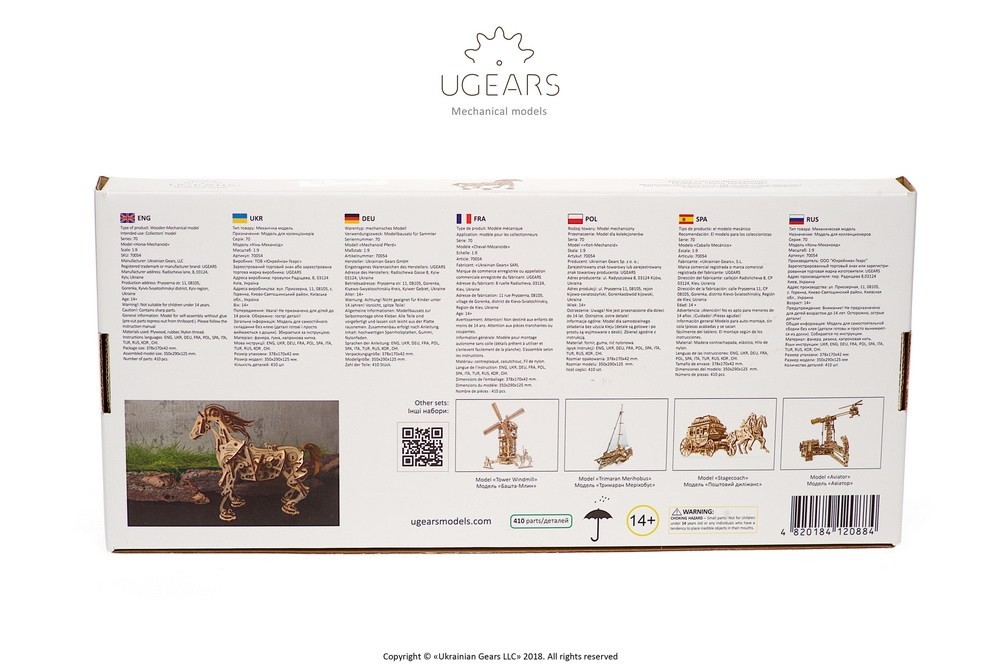 Combining the ingenuity of Leonardo DaVinci’s inventions and innovative ideas of the modern world, in an attempt to reincarnate those walking machines, Ugears created the Horse Mechanoid.  Like all Ugears models, the mechanical Horse was built to move on its own, powered by a genuine self-propelled mechanism. 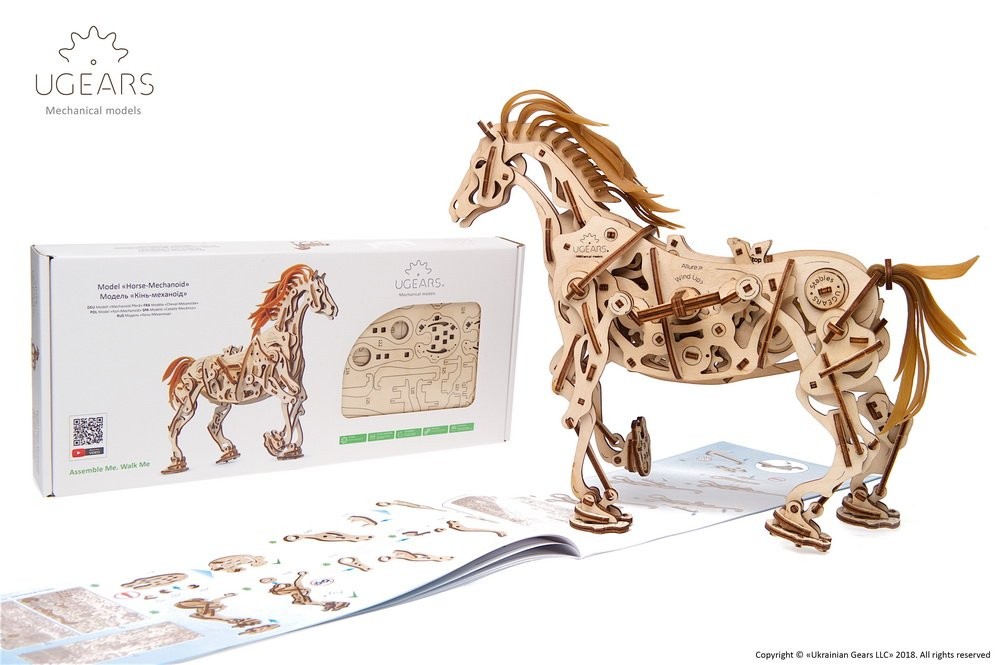 However, there were challenges along the way of creating the Mechanoid and bringing it to perfection.  While solving the problem of stability of moving construction, Ugears toy engineers developed a new, revolutionary strategy.  Following the anatomical specifics of real horses, and to ensure that the Mechanoid’s legs move like the ones of a real horse, Ugears designers implemented a claw mechanism. 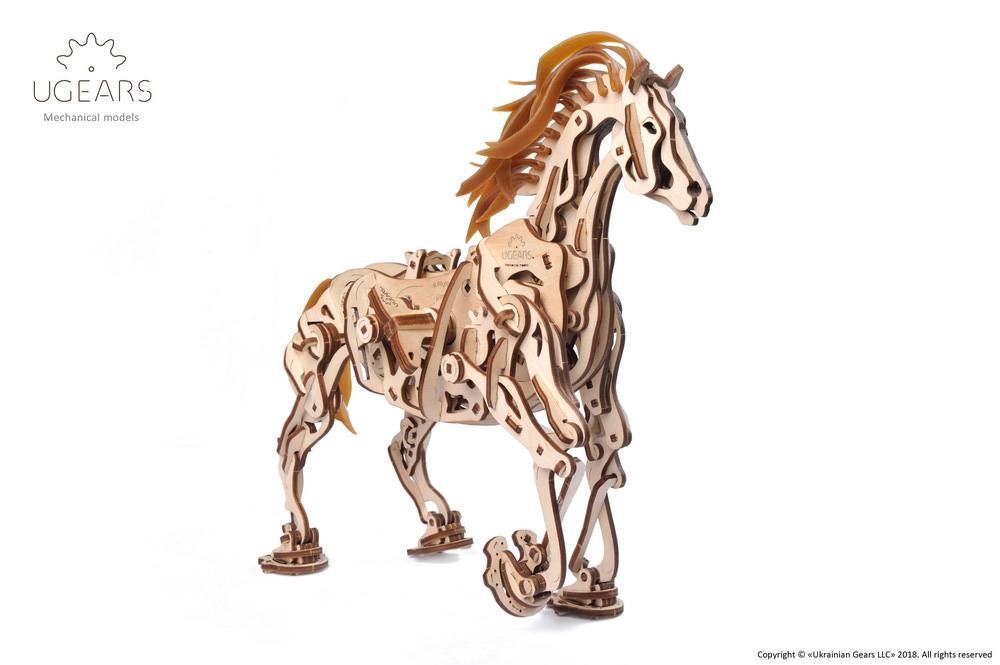 However, the moving element of the Horse Mechanoid is its rubber band mechanism, connected to the movable elements, in addition to a pendulum, located in Mechanoid’s chest. 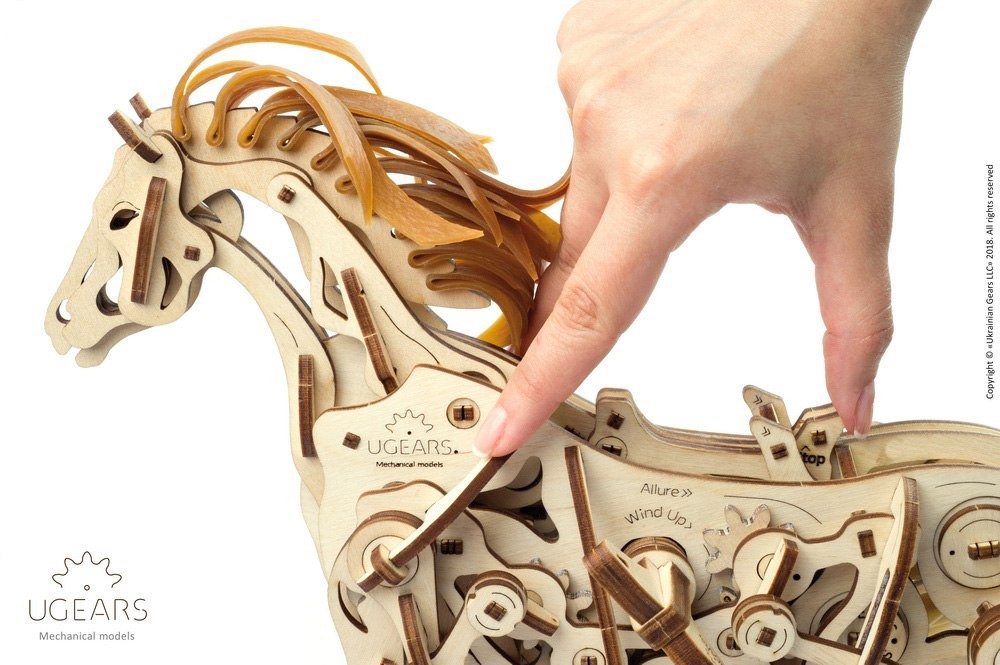 Escape from electronics and modern technologies and dive into the romantic, old-fashion fun of horse-back riding.

The Ugears Horse-Mechanoid model kit is made of sustainably sourced high grade wood and has everything you might need for assembly.  The quality of the parts is top-notch: a laser method is used for cutting items from a plywood board that provides precise hairline cuts. 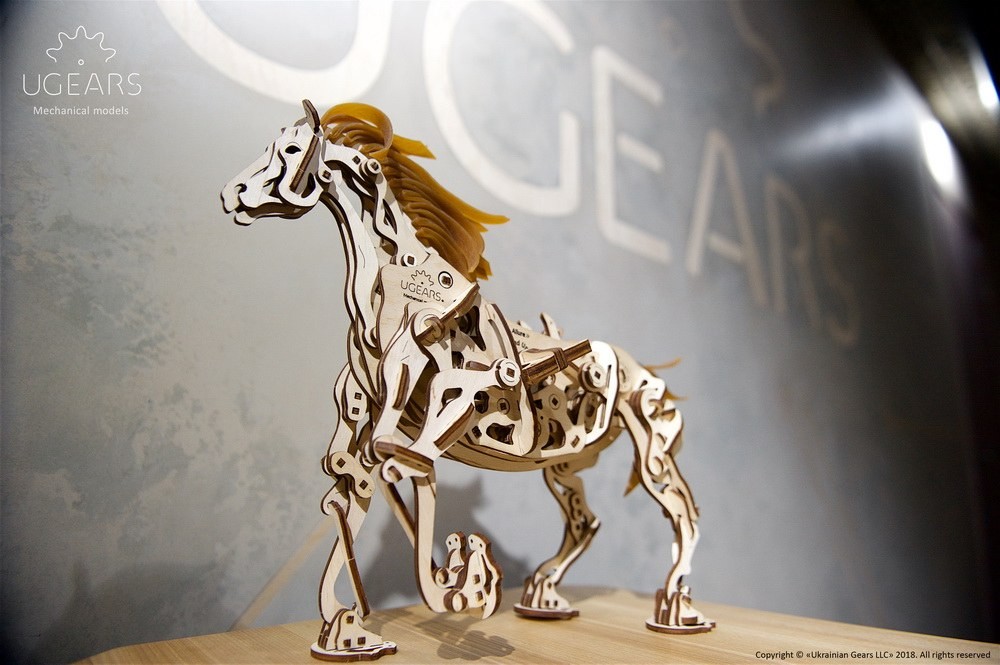 The details have to be pulled out of the boards and assembled to create a complete model. Like all other Ugears models, the Horse-Mechanoid comes with step-by-step, full-color, truly easy to follow instructions in 11 languages (English, German, Ukrainian, French, Polish, Spanish, Russian, Turkish, Italian, Chinese and Korean) and requires neither glue nor special tools to be fully assembled into functional self-walking Horse. 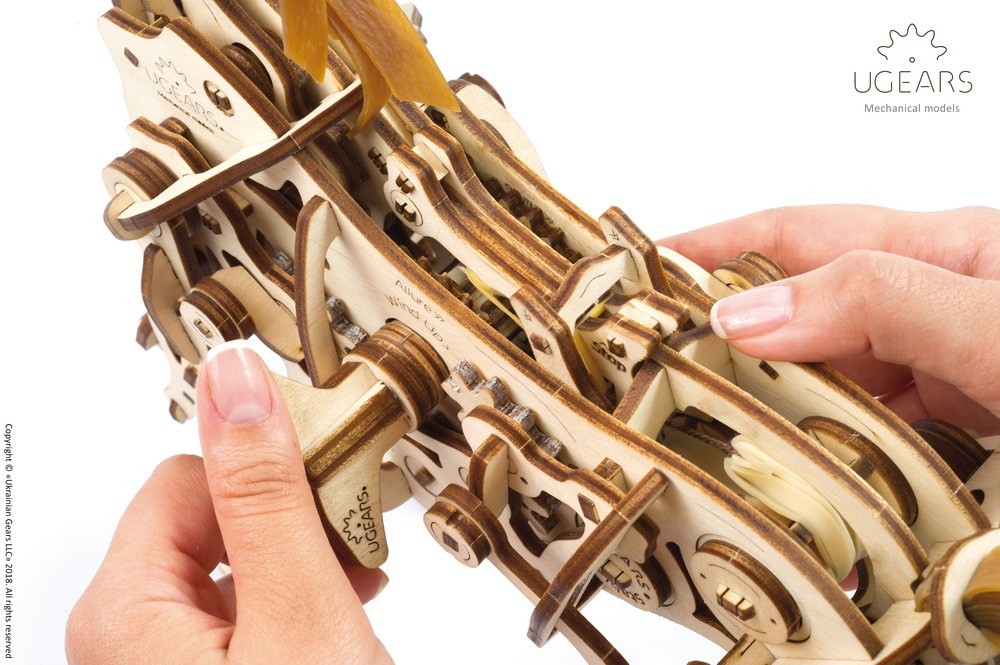 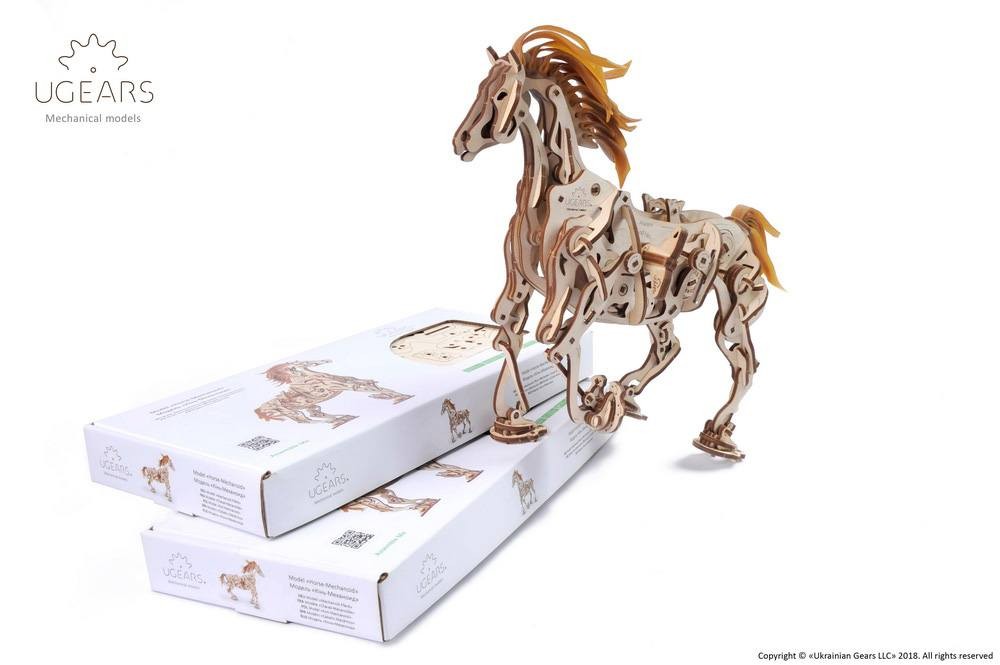 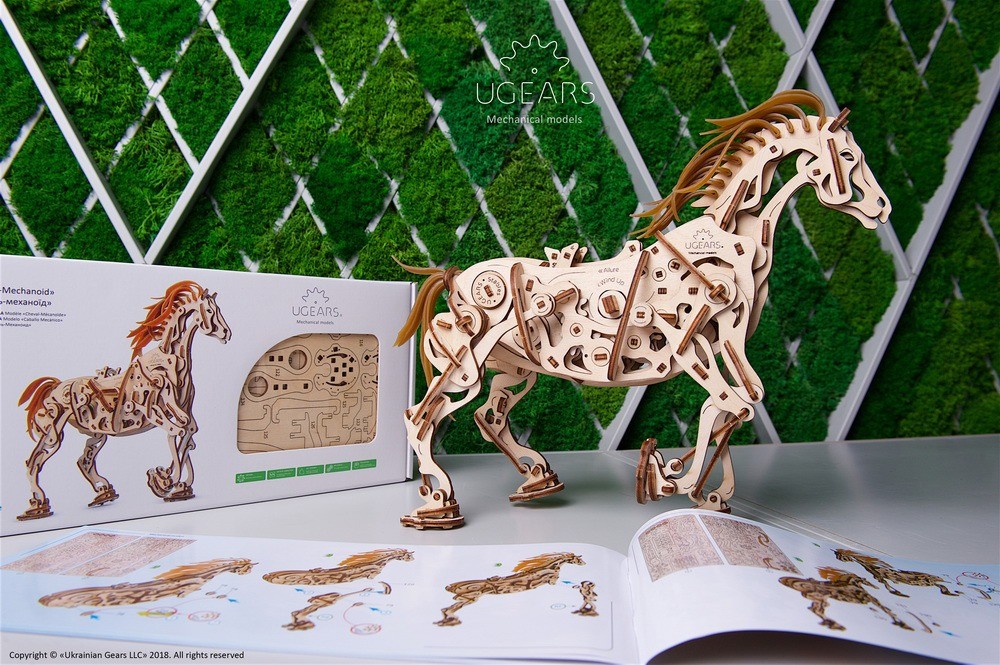